Maine East Director of Choirs Kate Lee has only been at Maine East since the fall of 2018 but during that short amount of time she has had a major impact at the school. Her influence was recognized by the Illinois State Board of Education when she was recently named the 2021 Outstanding Early Career Educator. Kate is one of just five teachers in the state to earn state-wide recognition from ISBE.

“I feel humbled and honored to receive this recognition from the Illinois State Board of Education,” Lee says. “We as educators work so hard to serve our students every day that we don’t often have the time and space to take pride in our own work. I am grateful for this opportunity to celebrate the start of my career and give thanks to those who have inspired and supported me along the way.”

When Kate arrived at Maine East in August of 2018, she assumed leadership for a choral program that was in need of revitalization based on extremely low enrollments that had steadily declined before her arrival, according to Maine East Principal Mike Pressler. Students in the program demonstrated little enthusiasm or commitment to the art of singing – all of this compared to a robust and growing instrumental music program in orchestra and band. Upon her arrival, Kate reached out to every student in the program to introduce herself and to learn about each of them. “She scheduled auditions and workshops for the a cappella group that has become known as ‘Audacity In Blue’ and started networking with our sender schools to identify students who had room in their schedules to add choir as an elective,” Pressler wrote as part of his nomination letter. “By the actual start of the school year, she had already increased numbers and had already generated a level of student enthusiasm that had been absent for many years,” he wrote as part of her nomination. 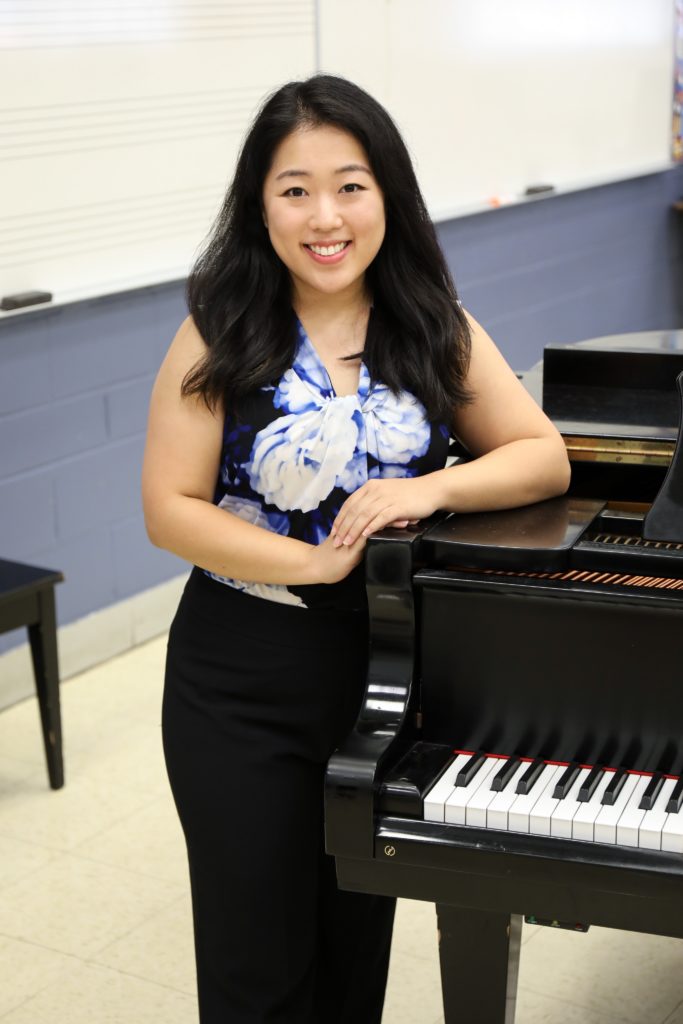 “The progress that students continue to make under her leadership is simply astounding,” Pressler wrote. “After her first nine weeks at Maine East, at the fall choral concert, I had NEVER heard ensembles across an entire program that had improved so dramatically technically and musically – the characteristic tone, intonation, stamina, and consistency were truly excellent – and they have continued to grow over the past two years, all while building the technical and expressive skill to perform increasingly more challenging repertoire.”

One of her students, Kevin Opeña, wrote this about his teacher: “The atmosphere during and outside class times always felt like a sense of community. She occasionally organized circle times to check up on how we were feeling. The door to her office was always open for her students.”

Kate shared as part of her application that her philosophy of education is influenced heavily by her experience as a first-generation immigrant from South Korea who was often provided an ethnocentric curriculum in her own K-12 education. “That led me to feel the need to be more American or White in order to not only assimilate, but succeed in school and in life,” she wrote. “It led me to be ashamed of my own cultural identity. As an educator of students of many different cultural backgrounds, it is my goal to provide a curriculum that is representative of my students’ cultures, so that they may further their understanding and connection to their own cultures as well as others. I seek to build a choral program that is inclusive, representative of our students, and culturally responsive and sustaining.”

In addition to the culturally responsive approach to teaching, Kate also started a class for students of all abilities. While her special education training was limited, she eagerly created a space in which all students can experience music titled ‘All In Choir.’ The choir brings together special education and general education students. The group started a wintertime tradition of delivering “singing Valentines” to students, staff, and administrators. “One of the most rewarding parts of teaching All In Choir is seeing students connect and make lifelong friendships,” Lee wrote.

“Working with students whose ability and experience are widely disparate, she carefully organizes the rehearsal process with a focus on specific areas for improvement,” Maine East Fine Arts Department Chair Ed Eubank wrote as part of his nomination letter. “She continually pushes students beyond what they believed they could accomplish. The results are choral performances which resonate with vocal beauty and musical expression.”