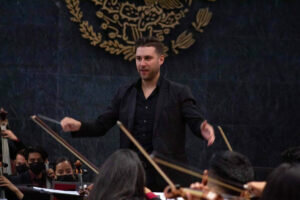 In order to be selected for the masterclass, Nix had to submit an application with videos of himself conducting orchestras, his professional resume, and a repertoire list of work of music that he has studied and performer. He also had to provide letters of recommendation from respected musicians who are familiar with his work. Nix used footage of him conducting the Maine South High School Symphony Orchestra as part of his application.

The masterclass culminated in a public concert at Los Pinos (The Pines), the former residence of Mexican presidents, with each of the six conductors taking turns conducting the Carlos Chavez Symphony. Each of the conductors received a diploma from the Mexican Government and Maestro Diemecke to commemorate their completion of the masterclass course. 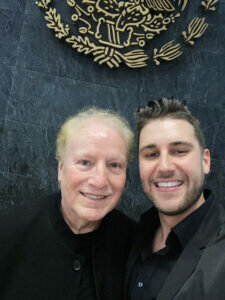 “The masterclass was a very intense but enjoyable experience,” Nix says. “It really showed me what the world of a professional orchestra conductor is like, especially with the pacing of rehearsals and the amount of preparation needed for a successful concert with adult professional musicians. I am eternally grateful to Maestro Diemecke for taking the time to metro me and foster my musical growth as a conductor. His musical vision and philosophy is to always inspire both the musicians he works with, and the audience, to the greatest level possible. He left an indelible impression on me, and I feel lucky to count him as my teacher and mentor.

“The masterclass experience also informed my rehearsal processes and expectations here at Maine South so that student musical products can be at an even higher level than they are currently. Teaching students that in the professional orchestra world you only have four rehearsals before a concert has really raised the level of work that students achieve over a concert cycle; high school concert cycles, by contrast, last typically about 7-8 weeks.

“The Maine South orchestra students are now beginning to understand that if they want to pursue the career path of a professional musician that they need to put in a lot of work both in, and outside, the orchestra classroom. They’re learning that rehearsal time is that special and precious time where we work on that musical and expressive communication that inspires the audience, not just how to physically play the notes and rhythms on the page. A convincing interpretation and performance has a musical soul to it – this is our goal every day.”